Leeds and AI probably are not two concepts you would put together, but the burgeoning startups and the University of Leeds’ £40m new research centre, Nexus, would beg to differ. Datasci is also getting big here - with big data work leading the charge. Nationally, Leeds has the fifth highest average digital salary, (£47,959), and the largest salary in the North of England. Leeds is a national centre of excellence for Big Data applications, with the aforementioned University of Leeds recently rated 1st, nationally, for research into this field.

The city’s Tech scene is well promoted through recruitment companies and its small but growing number of new startups. Tech Nation's 2016 report found that the Leeds city area supports 23,734 digital jobs producing a Gross Value Add (GVA) of £671 million to the local Leeds economy. We have yet to see how far AI will push that figure up for this cosmopolitan northern UK city, but we're confident that this has value add already begun.

So here's our list of AI companies in Leeds so far: 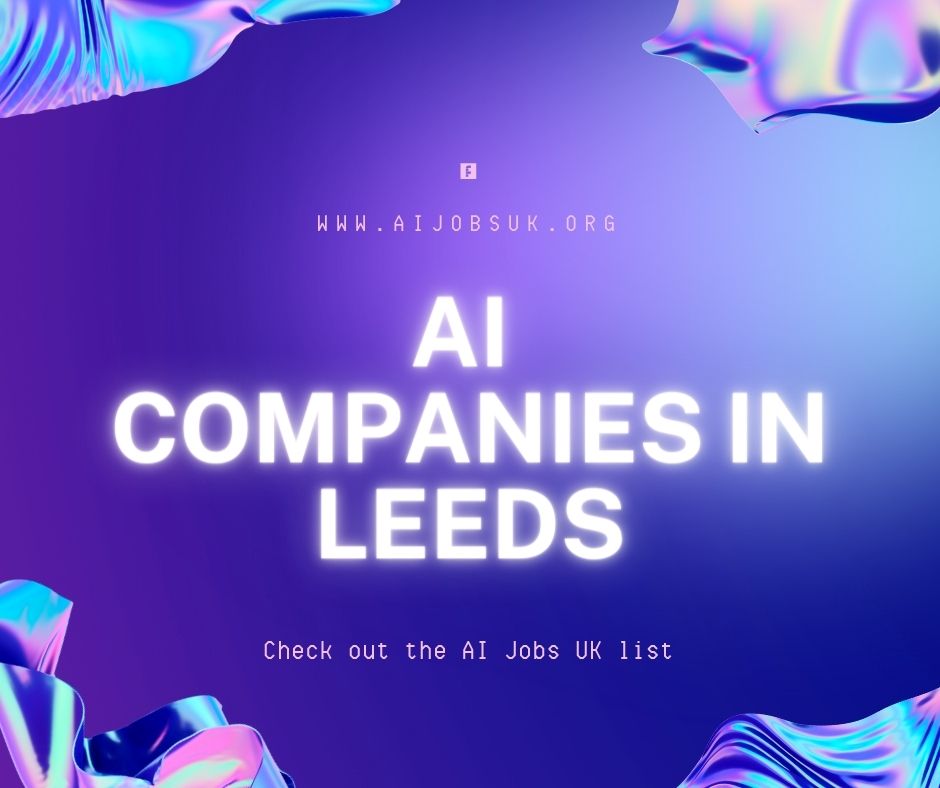 CRISP is on the bleeding-edge of AI technology that is being designed around online risk and harm prevention. It’s nasty, difficult stuff - so thank goodness a hardy startup in Leeds is at the forefront of this kind of artificial intelligence. Crisp protects more than $4.5 trillion in aggregate market capital for its customers.

Established in 2005, Crisp began by protecting children and teenagers using online games, apps and social networks from pedophiles and child exploitation groups. Since then, the company’s intelligence capabilities, using social media and artificial intelligence, have expanded to include trolling, hate, media, influencer, terrorist, conspiracy, election interference, 2bad actor, agenda-driven, fringe and community groups. Crisp uses what they call a continuously-trained Social Intelligence Graph”, which captures social media and other communications intelligence on people who are labelled as activists and bad actor groups that could harm their clients.

The use of AI in healthcare is one of the most compelling and exciting use cases for the existence of artificial intelligence, as a means of freeing up the time of human doctors and medical specialists, as well as leading to the highest possible accuracy when it comes to diagnostics and prognosis, which with AI will be almost completely free of human error.

Itecho Health, with its AI-based platform AscelusTM hope to add to the sharpest of tools out there where AI and deep learning is being used to support both clinical and patient knowledge by blurring the staunch lines between, and helping to reduce the burden on health staff.

Hyper Group is an AI agency. They currently uses a combination of AI-powered software and consulting to give its clients ‘hyper’ personalised insights about how their customers act and think.

The platform ‘connects the dots’ of data about customer’s buying and browsing behaviour, creating insights for optimised marketing, merchandising and supply chain performance. They are praised by clients as experts in applying advanced analytics and machine learning & AI to the complexities of customer data whilst being fully focused on the commercial impact. Hyper Group is hyper-growing at the time of writing, and they expect to be recruiting over the coming months.

We weren’t sure about Sigmund.ai as we found very little info about this business online. But according to Traxcn, Sigmund.ai bills itself as an AI-powered decision tool for mental health practitioners and for patients. Again, this is another AI-healthtech company based in Leeds. Sigmund.ai claims to be an AI-based decision support platform to assist mental health care practitioners through the treatment process. It listens, understands and observes conversation with the patient and provides a separated transcription of patient and therapist highlighting indicating phrases, and performs a voice breakdown to detect behavioural and mental conditions. This is a hugely advanced use of artificial intelligence for human healthcare if so, which might be why they're trying to keep things under wraps for now.

UK city living at less than half the price of London

Stay updated with the latest AI job opportunities in Leeds. Sign up - no spam, only updates from AI Jobs UK.